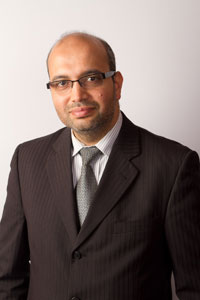 Dr. Khaled Ramadan received his medical degree in 1997 and completed his training in internal medicine in Ireland where he obtained his certificates from the Royal College of Physicians of Ireland (MRCPI) in 2000 and certificate of completion of General Professional Training (GPT) in Internal Medicine. He completed his hematology training in the UK with Membership of the Royal College of Pathologists of UK (MRCPath) granted in 2004. In 2008, he became a fellow of the Royal College of Pathologists of the UK (FRCPath). He then went on to do a clinical and research fellowship in lymphoma, leukemia and bone marrow transplant in Vancouver from August 2005 to December 2006. He joined the Division of Hematology at St. Paul’s Hospital in January 2007. He currently holds an appointment at UBC as a Clinical Assistant Professor. Dr. Ramadan is very dedicated to clinical research, especially chronic lymphocytic leukemia.