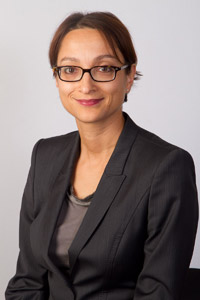 Dr. Gayatri Sreenivasan is a Clinical Assistant Professor in the Division of Hematology at the University of British Columbia, staff hematologist at Vancouver General Hospital and Medical Director of the Apheresis Program of BC. She received her medical degree in 1996 then completed internal medicine and hematology training at the University of British Columbia in 2001.

Dr. Sreenivasan is certified in both internal medicine and hematology from the Royal College of Physicians and Surgeons of Canada. She became a staff hematologist at Vancouver General Hospital in 2001 and Medical Director of the Apheresis Program of BC in 2008.

Dr. Sreenivasan has an active clinical practice covering the spectrum of hematologic disorders, including benign and malignant disease. Particular areas of interest include apheresis medicine, venous thromboembolic disease and myeloproliferative disorders. She is actively involved in undergraduate medical education and, with the Block Chair, coordinates development and delivery of the hematology curriculum for the Division of Hematology.