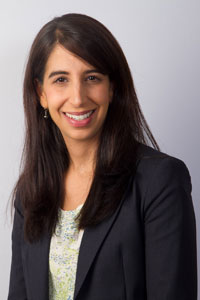 Dr. Alina Gerrie joined the Leukemia/BMT Program of BC as an attending physician in January 2013.  She completed her medical training at the University of British Columbia and the University of Toronto. She then undertook a joint fellowship through the Royal College Clinical Investigator Program with both the Leukemia/BMT Program of BC and the Lymphoma Tumour Group at the BC Cancer Agency from 2010-2012.

She earned a Master’s of Public Health degree from the Harvard School of Public Health where her research interests included analyzing the impact of genetic abnormalities on population-level clinical outcomes in chronic lymphocytic leukemia (CLL) patients.  Other research interests include the investigation of novel therapeutics for CLL and lymphoma, as well as analyzing the role of stem cell transplantation for Hodgkin and non-Hodgkin lymphomas.